The EA have released provisional figures of the number of responses received to their Charges Consultation which closed on 16th. September. 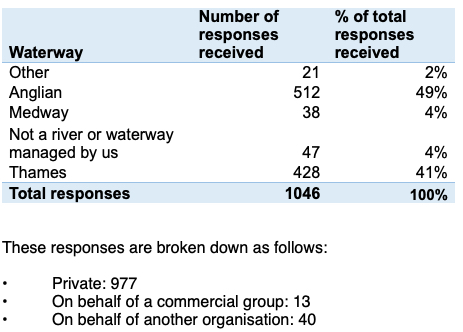 In addition to these direct responses the EA also recorded 105 emails containing feedback on the consultation but which was not given through the formal consultation route. They will consider the comments made in these emails alongside the formal responses.

The TMBA, together with other boating organisations representing powered craft using the non tidal Thames made considerable efforts to encourage all boating users of the waterway to respond to this consultation and the poor response is disappointing.

Outcomes from the submissions and related comments is expected to be announced during October.

This entry was posted in Latest News. Bookmark the permalink.