Many river users consider dredging (or lack of ) to be a major issue and, given financial and logistical constraints, it seems unlikely that any major undertakings will be possible in the foreseeable future.

Dealing with the fairway, the Customer Charter defines this as, generally speaking, being the middle third of the river, and declares stretches of the river as being suitable for navigation in the fairway by boats with certain approximate drafts – e.g. Reading to Windsor 1.3 metres (4’6”).

The river depth in any one stretch is usually significantly greater than these targets but there are some ‘hot spots’ in each stretch that are close to the minimum and where any significant shifts or deposits of material could create problems – the upper end of Benson upper lock cut springs to mind as a specific example. By definition, lock cuts themselves should meet the depth criteria and the ‘middle third’ is inadequate widthwise in such narrow channels.

In arriving at a realistic dredging policy, it should not be too difficult to recognise these ‘hot spots’ and for the Customer Charter commitment to be such that any notification of problems at these locations be given immediate attention.

The ‘middle third’, as an indicator of greatest depth,  cannot always be relied on, particularly on significant bends, as the deepest water may well lie to one side or the other.

Some additional attention should be given to the provision of Navigation Marks which, at the present time, are constrained to notices on trees (sometimes obscured by foliage) indicating the main channel and a (very) few buoys marking shallow water on either side of the main channel or isolated hazards. The location of these buoys seems very arbitrary and only indicates that shallow water exists.  One buoy actually sits on top of a sandbank which is visible at normal river level! 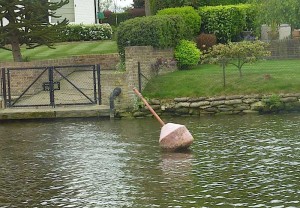 It would be much more helpful if such buoys were positioned to indicate the limit of, say, 1 metre depth, thus giving a clearer indication of where the deep channel lies.

Where depth restrictions are absolute – e.g. above and below the bridge at Clifton Hampden where the river bed is hard rock – navigation marks indicating the position of deepest water would be helpful as well as a declaration of the depth at those points.

Dealing with depths outside the fairway, and particularly at mooring places, more could be done to explain the responsibilities of the EA and the constraints they face in managing these issues.

Where the EA is responsible for moorings it would be desirable for such moorings, wherever possible, to accommodate vessels with the same approximate draft relevant to that stretch of the fairway.  It is appreciated that this may not always be possible but a published indication of the depth available at such moorings would be helpful to river users.